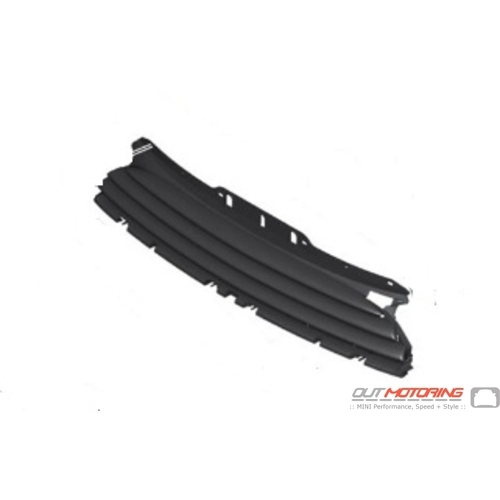 If you have purchased this item and would like to leave a product review please sign in to add your review.
1 Most useful customer reviews (see all reviews):
Guest
Purchased here. Installed upon new 2013 Hardtop delivery. Terrific looks and easy for dealer to install. Slats are covered in clear plastic sheath instead of chromed plastic sheath. Appears very dark black under most lighting angles but under others reflections give "gray" streaks which is also nice. Highly recommend if you think the standard is too much chrome. Looks good even with lower grille chrome strip. That part is much harder to replace.

Was the above review useful to you? Yes (0) / No (1)
If you have purchased this item and would like to leave a product review please sign in to add your review.

I've been ordering parts from Outmotoring's site for a few years now after having some bad experiences from other Mini part sites. Although I have only had a few order errors, Outmotoring has corrected it quickly both times. If 'to err is human' than Outmotoring is 'more human than human'. Keep up the good work guys and I'll keep buying from you! Rick Dallimier
I got this light for my R53 Cooper S and the plug in for the harness did not fit the harness in the car. I needed to modify the circuit board and change the wiring harness in my car so that it would fit. Nick Simone
Im in Australia, so receiving my products within two weeks was great. Just arrived today and im so stoked to be doing up my Mini Cooper S with some very cool accessories. A huge thanks to the team at Outmotoring.com for their continuing support and answering all my stupid questions, of which i asked many, even before i had placed an order. Rare levels of customer service. Materials used in products appear to be of high quality so i will update when i have finished installing them. Once again, thankyou Scotty
Read MORE COMMENTS »      Write Your Own Testimonial »