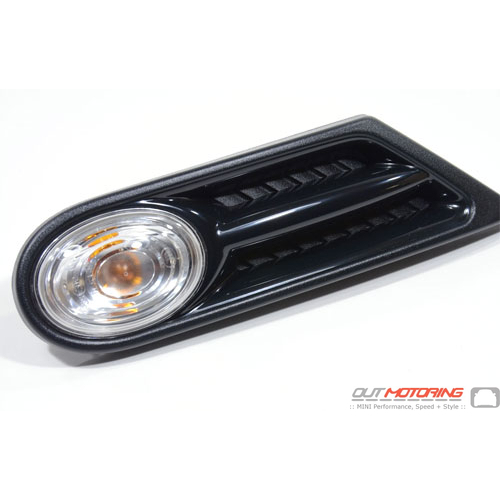 If you have purchased this item and would like to leave a product review please sign in to add your review.
1 Most useful customer reviews (see all reviews):
Karen Casey
This customer purchased the item at our site.
The Roadster I just purchased is black & I find that I prefer to replace the chrome with black. These are about the only replacement side scuttles in black I could find. I know there is limited replacement parts in all black so there are few choices to offer. However this one just looks cheap. The plastic just doesn't look like it fits on the car. Perhaps because it is dull as opposed to the piano black Mini uses currently. This is the only all black replacement I have found but think I may try another way to get the side scuttle's chrome covered.

Advantages: If you are covering all your chrome, this is a quick and easy fix. It is super easy to install. Takes about 5 minutes to watch a coupe YouTube videos on how to do it and literally a few minutes to do it on your own. I think it might look better on cars which are not black.

Disadvantages: If you are looking for the piano black you will be disappointed. The plastic is thin and a matte black which looks dull against the metallic black paint of my Roadster.

Stellar customer service. Broad selection. Quick shipping. Easy returns. But most importantly, actual human customer service. In the days of internet shopping, Out Motoring is like going down to the ol' auto parts store. I fully intend to look here first when I need parts for my mini. Thank you Out Motoring. Jonathan L
Just purchased the Black "slat" Grill to replace the standard chrome slat grill on my R56, I installed it with the original chrome trim pieces, looks fantastic for $100. Not knowing what I was doing at first and it still only took 10 mins. to install. Lynn Harlan
I have now one of the best Mini Cooper JCW in Switzerland, thank you Outmotoring:) Bruno
Read MORE COMMENTS »      Write Your Own Testimonial »