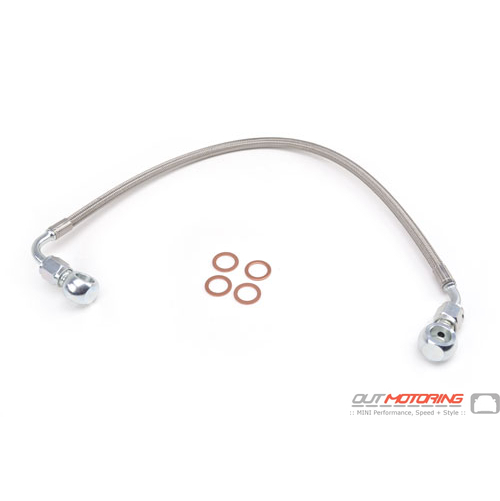 If you have purchased this item and would like to leave a product review please sign in to add your review.
1 Most useful customer reviews (see all reviews):
Reed Collins
This customer purchased the item at our site.
This was a fairly difficult replacement. You remove the exhaust sensors, turbo heat shield and downpipe heat shield, then the downpipe itself, and finally another heat shield right against the engine block. This oil line isn't shaped like the one that comes out so pay attention to the routing path of the one you remove. Also this oil line has fittings on either end that have to be tightened once the bolts have been installed and you are happy with the hoses position. If you don't tighten then oil sprays everywhere...not that I'd know...and I certainly didn't do it twice. Tightening these fittings is kind of tricky, as you tighten then the preformed ends rotate out of position, you fight it from rotating out but will fail...I really hope these fittings don't break loose while I'm driving down the road, kind of a bad design.

Disadvantages: No install instructions left me unaware of the hose end fittings so I got to disassemble the down pipe assembly 3 times...I hope they hold.

Was the above review useful to you? Yes (3) / No (-1)
If you have purchased this item and would like to leave a product review please sign in to add your review.

Grill badges are adorable, you need a dog!!! or a Pit Bull head- NO ears chopped. Cas Pendleton
So far not impressed with communication of order status.

ANSWER from OutMotoring: Hi, we send a order confirmation immediately after each order is placed and then another email with tracking as soon as it ships. Maybe our emails are stuck in a spam filter and are not getting to you? Keith Davis
I recently made several purchases with OutMotoring. The team was a huge help with not only the selection of products but following through on delivery and overall satisfaction on product. I've worked with several other retailers in the past, I have to say my experience with OutMotoring was hands down the best I've had in a long time. Jose Martinez
Read MORE COMMENTS »      Write Your Own Testimonial »