Center Console Organizer Kit: R50/3
sweet little product. matches perfectly. install is tricky, you can't just stuff it in there. i loosed my lower center console (2 screws in cup holders and 2 under mirror adjusters) then removed the lower screws on the pillars. that let me pull everything forward and create enough room to stuff it back there.
Read more product reviews
Read all reviews

A Trip Down Memory Lane: The History of the MINI Cooper 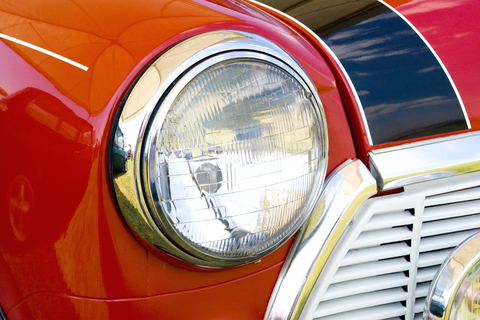 Take a trip down memory lane with the history of one of today's most favored cars in the world, the MINI Cooper!

The MINI Cooper: A Trip Down Memory Lane

Over the last ten to fifteen years, one car that has made a huge splash on the interstates and highways of the United States is none other than the Mini Cooper. The Mini has a very storied tradition that goes back to it's origins in Britain. Take a trip down memory lane with us into the rich history of the Mini Cooper.

An engineer with the British Motor Corporation (BMC) in the 1950's had a dream that a small car would be put outside the house of every working person. The car that Alec Issigonis designed eventually stood outside everything from a palace to a hovel. With a limited budget, he often sketched engineering plans on the back of envelopes; Issigonis and his team worked against the clock to get the car into production. Sir Alec died in 1988, but his car lives on.

During the 1960's, the Mini Cooper was a staple of British society and was revered for it's small compact size with front wheel drive, and with over 75% of the interior developed for storage and carrying passengers. There was even a sports car model that won the Monte Carlo rally three years straight during the 1960's.

The task of finding a new car was eventually given to Issigonis in 1957; BMC wanted him to produce a smaller version of the same vehicle, but Issigonis had his own ideas. He knew that if he were to build the best small car, he would have to do better than copy others on the market. The goal was to have a car about ten feet long. However, in a car only four feet two inches wide, the engine with it's attendant gearbox is too long to fit in the space available. Issigonis took the decision, with time running out, to mount the gearbox under the engine, which had never been tried before. It worked.

The car launched on Augst 26, 1959, and was priced at 496 GBP, which was roughly the price of the wrongly named Ford Popular, and nearly 100 GBP cheaper than the Ford Anglia. At that price, BMC were not just cutting their own throats, they were taking a hot bath and opening every vein in their corporate body.

The Mini was attractive to both tuners and racers, and leading this group was John Cooper. In 1959 and 1960, he was the World Champion Formula One racing car constructor and had personal success in his 500cc special. Cooper felt strongly enough to go to the chairman of BMC to ask if he could build a run of four seater GTs, and after a brief meeting the chairman said "yes, go away and do it".

They originally planned to make 1,000, but eventually ended up making 150,000. They altered and strengthened the engines and changed the gear ratios. The first Mini Cooper came out in October of 1961. The Mini and Cooper became inseparable, even though there was never any official agreement between the two and Cooper only received a 2 GBP royalty on every car for the research and development. The little car drove into a revolution. Driven by princesses and harlots, pop stars and baronets, the car became a vital fashion accessory in the style capital of the world. The Mini was perfect, it was cheeky, and it was fun. It was one of the earliest cars to appeal strongly to women, who found the perfect little thing friendly and accessible. There was obviously a danger of falling between the twin demands of women drivers and male boy racers, but the image of fun satisfied both parties. The Mini, the sixties icon, passed two million sales in 1969 and survived them all.A low centre of gravity and a wheel at each corner meant that fine handling was the Mini's greatest asset.

The Mini is a cultural icon and shows up in movies such as The Italian Job (1969), The Bourne Identity (2002), Goodbye Pork Pie (1981), and in Lara Croft: Tomb Raider (2001), as well as many other production films. It has also been featured in television shows such as Mr. Bean and (as the Mini Moke) in The Prisoner. Madeline Zimmer, in Jean-Luc Godard's Masculin feminin (1966), said she hoped her new single would be a big hit so she could buy a Cooper.

By 2000, BMW had ownership of the Mini, and due to losses amongst his holdings, had to let go and end production of the car. The last original Mini Cooper was built on October 4, 2000, and was presented to the British Motor Industry Heritage Trust.

BMW then took over ownership of the Mini name and since then, has developed their MINI line of cars that are still a very much loved car around the world to this day. The new Mini is often referred to as the "BMW Mini" or the "New Mini". Still, the car is very popular across the world and is a newer and sleeker version of the classic Mini that was so infamous so many years ago, and does an excellent job of carrying on that heritage and tradition.

Comments on A Trip Down Memory Lane: The History of the MINI Cooper