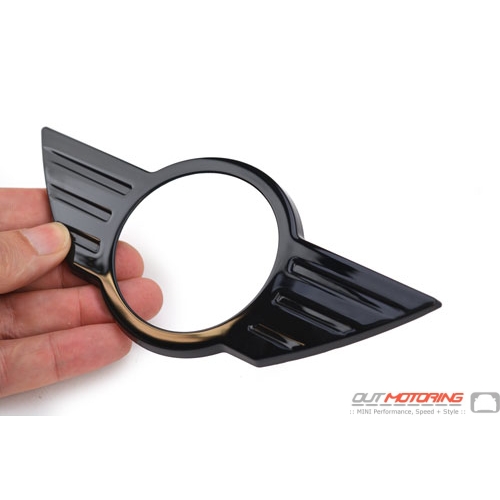 If you have purchased this item and would like to leave a product review please sign in to add your review.
1 Most useful customer reviews (see all reviews):
Karen Casey
This customer purchased the item at our site.
These are great. I really didn't want to permenently remove the original chrome Mini badge which had been on the car since 2015 (6 years). First I was afraid it would damage the paint or would be difficult to remove. Without question there might have been a different shade under it because of the effect of the sun, so any replacement badge would have had to be exactly the same size to look right.
I failed to realize that the logo on the front is quite a bit larger than the one on the trunk lid. I suggest you measure even if you think you are ordering the correct one, just to be sure.
Once you get the backing peeled off, it is a simple matter to place this over the clean badge. Just hold it down and press for a couple minutes to insure that the adhesive backing has made contact at all points. I elected to not cover with center section with the included sticker as I thought it might look peculiar and well, rather cheap. Perhaps in the future I will give it a go if I decide to change the look.

Advantages: Not permenant so if you grow weary of the black, it can be removed. Strong adhesive, keeps the badge in place. Choice of colors in the center section which you can use or leave off. That way you are covering most of the chrome but the "MINI" logo in the center remains bright in comparison to the black

Disadvantages: Truly I can't think of any disadvantages but should I find one in the future I will edit my review!

Was the above review useful to you? Yes (1) / No (0)
If you have purchased this item and would like to leave a product review please sign in to add your review.

Just received my latest order for the R56 Gloss black hood scoop. Easy Install and great fit. Only issue is the gloss finish has major swirl scratches. Not sure if this was a return that got put back on the self or came from factory this way. Tim Wagner
Been ordering parts for my R55 '09 baby boy and these guys are excellent when it comes to communicating. Quick and easy ordering. Will continue to order from these guys!!! Brittany E.
My Car in the Caribbean was wrecked and i was having a lot of issues getting the parts i needed from multiple suppliers. I supplied a list of what i needed to Aaron and the rest is history, i can honestly say it has been one of the best representations of customer service i have ever had and it was clear my interest was at heart every step of the way, even a difficult last minute change in shipping was facilitated without fail. All parts were perfect and i can honestly say i have no regrets! Excellent service from and amazing team! Rene Rochford
Read MORE COMMENTS »      Write Your Own Testimonial »