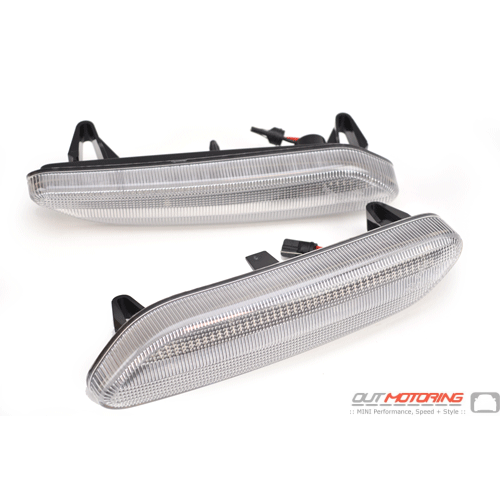 If you have purchased this item and would like to leave a product review please sign in to add your review.
1 Most useful customer reviews (see all reviews):
MICHAEL BLOODGOOD
This customer purchased the item at our site.
Absolutely love these LED side lights! I upgraded from my stock single-bulb side blinkers to these. I had no idea they were automated as well. Totally worth the small up-charge!

Disadvantages: Can't think of any.

Thanks so much, I installed the MSD coil, MSD 8.5 mm wires and Iridium plugs. Mini runs much better, even idles at lower rpms and seem smoother in all gears.
I'm thinking it will pay for it's self in gas saving in short order.
Thanks again for offering these products.
Best Regards,
Ron Garcia Ron
A note of appreciation from our MINI club...

-Greg Greg
Thank you for being the most reliable source for my Mini project(s). I really appreciate the service and attention to detail. All the best. You can quote me on that- Daren Daren
Read MORE COMMENTS »      Write Your Own Testimonial »