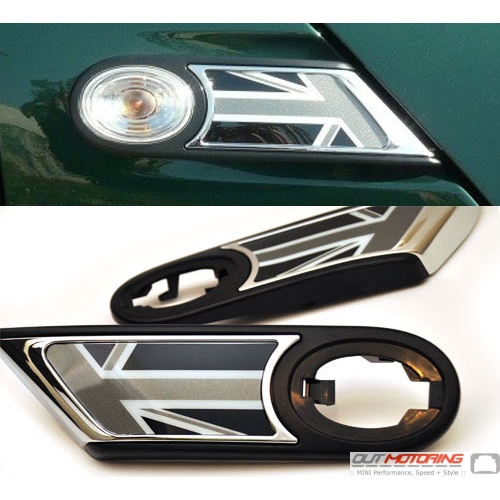 If you have purchased this item and would like to leave a product review please sign in to add your review.
2 Most useful customer reviews (see all reviews):
Dan B.
This customer purchased the item at our site.
Just received my non-OEM Black Jack 'scuttles' for my R57s. First impressions, they look just as good as the OEMs and installed easily enough with the same quality fit. I went with these non-OEMs as two of my Black Jack emblems (same side of course) fell out of the OEM carrier. So figured I would go with the cheaper one-piece untis this time around vs. another trip to the dealership. Even with the exchange and shipping (I am in Toronto), seems like a more reasonable price point (inserts alone are C$180+13% tax here). I did see one comment around fading so time will tell I suppose. 5 stars for now and great service from OutMotoring as well. Thanks.

Disadvantages: - possilbe concern around long-term fading from another reviewer (still rating 5 stars unless I start seeing this for myself)

Was the above review useful to you? Yes (0) / No (0)
Clint Klughart
This customer purchased the item at our site.
I bought these almost 6 years ago, and I can't say I'm too impressed with the way they've held up. After about 3 years the white areas have yellowed considerably, which looks quite ugly and weathered, as compared the OEM mirror covers I own, which I've had longer, and still look just as good as when I bought them.

I also found that the driver's side housing never fit as tight as the one on the passenger side. This however, may just be a flaw with pair I ended up with.

In short, I wish I'd have asked about getting the OEM version, (which I think was a special order item at the time) that was only about $40 more.
My advice, skip this and pay extra for quality.

Excellent fit. I bought the matte black to try and match the rest of the trim and it looks factory installed.

The upper grill snaps in and use the same fasteners as the OE. The new stamped nuts can be a bit annoying, just seat the nut on the ball of your thumb and turn. Once the nut cuts into the plastic use a nut-driver to snug up--don't over tighten.

The lower grill just snaps in. I cleaned and plasti coted the bumper black, as you can see the bumper color behind the new grill--my car is red so it really stood out.

This grill makes the car look so much better and more up to date. I really like it.

*plasti-cote is your new best friend* John
Hello Outmotoring,
I have purchased your stage 1 speed upgrade and the results are amazing.
Next I plan to add the header & exhaust. Also the brake upgrade.
Thank you for your research and advice.
I think it would be helpful if you also added a suspension replacement/upgrade option like your speed upgrades.
I am a pretty much amateur with all the products available, and as an owner of a 2008 convertible S will be needing to replace these components soon.
Please provide upgrade options.
Thanks,
Dave David Greenough
you guys are the best. I'm an ownner of a new/used mini and every part I have needed you have fouind for me or it is already on web site with full discription. Your help has been invaluable to me. Thanks Jeff Hull
Read MORE COMMENTS »      Write Your Own Testimonial »