Grill Trim Surround Cover: Black: F55/6/7
I'll be very honest: it's not worth the money. Paid $99 for a piece of very cheap plastic which doesn't even want to fit correctly. The 3m tape is so thin and won't hold to the entire piece. YES, I cleaned the car part with rubbing alcohol etc. The fit is so poor that you will see chrome sticking out in few places. It does the job to certain point BUT way overpriced for what it is. Still can't believe this cost me $99!!!!! Seriously? +++++++++++++++++++++++++++++ REPLY FROM OUTMOTORING: Hi, we show very clear photos that this is stick on piece and we have shown it installed and we were easily able to get it installed properly to cover the full chrome surround behind it. We have also sold well over 300 of these without any other similar complaints. Maybe you need some assistance with the install? If so, we are happy to help.
Adam Hadyna
Read more product reviews
Read all reviews 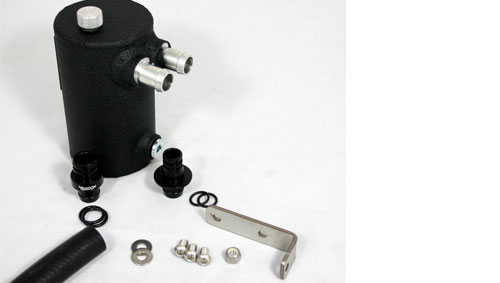 Category: MINI Performance Parts
Posted: 11-16-2015 03:55 PM
Views: 2164
Synopsis: Near perfection!
You cant always re-invent the wheel, but with the right manufacturing processes, you can make one a little bit more round.

BSH Oil Catch Cans for MINI Cooper are taken seriously. Externally all cans are welded together to avoid the all too common leaking issues experienced with bolt-together setups. Internally, they are better than the competition by incorporating mesh baffling to slow down oil vapors so they cool and condense inside the can instead of your charge piping/engine. All connections are made with push lock fittings and hose to limit the use of hose clamps that would otherwise clutter up the bay. Integrated drain fittings into the base of the catch can makes maintenance a breeze.


The BSH Oil Catch Can is one of the many MINI Cooper Parts and Accessories that we carry and will fit the following MINI Cooper Models and Years:

Comments on BSH Oil Catch Can for MINI Cooper