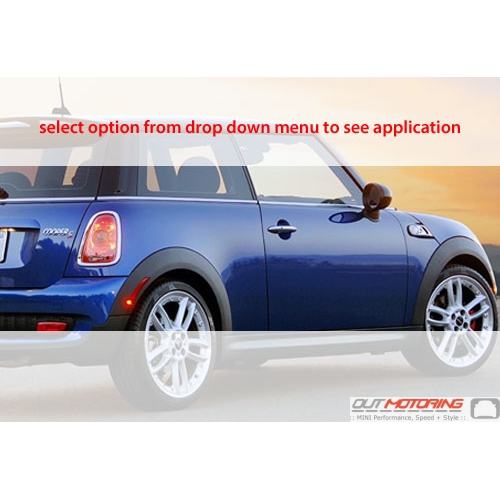 Excellent fit. I bought the matte black to try and match the rest of the trim and it looks factory installed.

The upper grill snaps in and use the same fasteners as the OE. The new stamped nuts can be a bit annoying, just seat the nut on the ball of your thumb and turn. Once the nut cuts into the plastic use a nut-driver to snug up--don't over tighten.

The lower grill just snaps in. I cleaned and plasti coted the bumper black, as you can see the bumper color behind the new grill--my car is red so it really stood out.

This grill makes the car look so much better and more up to date. I really like it.

*plasti-cote is your new best friend* John
Needed to replace the cheesy and broken e-brake handle on my 2008 Clubman S. Purchased the Cravenspeed assembly from Outmotoring. Received the purchase in a VERY timely manner and the quality of the Cravenspeed handle is top notch. Installation was easy and it felt good to toss the broken cheesy factory assembly! Thanks, Outmotoring! Lee
All I can say is wow! This sway bar installed easily. The NM Engineering instructions are excellent. I could feel the difference even backing out of the garage. I started it out on setting 3 out of 4, but will be moving to the stiffest setting shortly. The Mini handled great stock, so I was a little skeptical about how much of a difference this bar would make. Boy am I glad I elected to give it a try. Completely worth the expense. Loran Evans
Read MORE COMMENTS »      Write Your Own Testimonial »