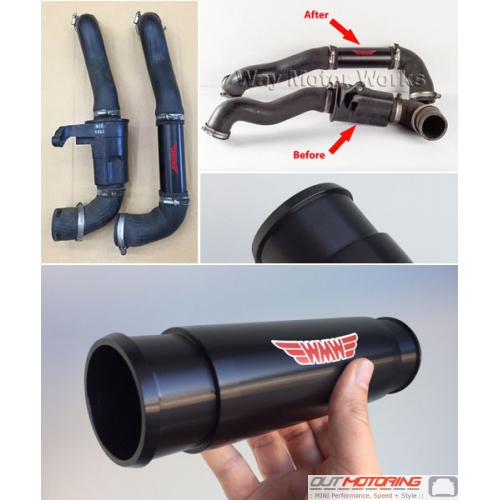 If you have purchased this item and would like to leave a product review please sign in to add your review.
1 Most useful customer reviews (see all reviews):
Max Hughes
This customer purchased the item at our site.
Easy to install, but the stock resonator isn't restrictive in any way which makes this basically useless. The pipe goes straight through with little holes perforated in the side, but the air isnt diverted by any means.

Was the above review useful to you? Yes (23) / No (2)
If you have purchased this item and would like to leave a product review please sign in to add your review.

Thank you
Ben Benjamin Green
Got a set of these as opposed to going the "Autostrap" direction as mentioned in many of the forums. They were a snap to put on and were a perfect fit. Thanks guys for putting them on your list! Paul S
Top notch company and service. Only place I could find a drain back valve for r53. $25 replacement vs $450+ for the entire oil filter housing. Best part was the service. UPS delivered my part 2 days late on a Next Day Air shipment ,which is not OutMotoring's fault, but OutMotoring went to bat for me and got me a refund. I really appreciate your customer service and other companies should follow suit. Thanks again you have earned my business from here on out. Claude Cesar
Read MORE COMMENTS »      Write Your Own Testimonial »