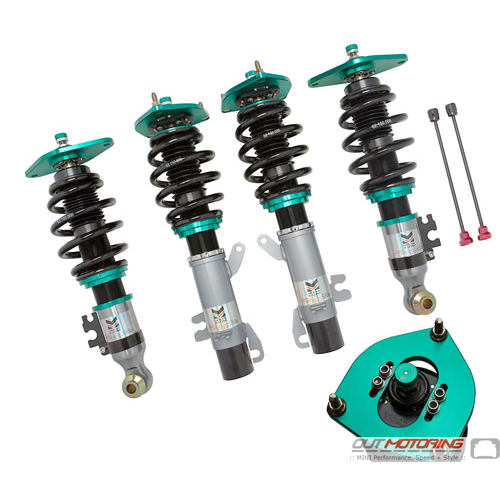 If you have purchased this item and would like to leave a product review please sign in to add your review.
1 Most useful customer reviews (see all reviews):
Scott Ripslinger
This customer purchased the item at our site.
Replaced a set of Godspeed Coil Overs for these Megan Coil Overs. Very easy swap, same spring rate, but different profile for the spring. These Megan’s provides a lot nicer ride.

Advantages: The removal of the top bushing for the rear coil overs is nice. One less thing to go wrong. Also the extensions for adjusting the damper is very nice. ave them for the Godspeed Coil Overs.

I recently installed the aftermarket chrome interior package on my Mini 2 door coupe S. Prior to installation the carbon black interior felt dark and somewhat cheap. After installation the interior came alive. It appears much richer and bright and almost a different interior. It takes patience to install all of the pieces but it is time well spent. Highly recommended. Lou Kirchner
I just said "GOODBYE" to Bitsy Marie, my 2006 Mini S Convertible. She will be missed. ????
But NOT FOR LONG! Because I just replaced 'ole Bitsy with a brand new MINI CONVERTIBLE S in the new color, "Melting Silver." (Bitsy was BRGreen & I put maroon bonnet stripes on her. I haven't named my new MINI yet, or gotten any accessories. Yet! This looks like a site where I'm gonna have some FUN! STEFFI
In this "internet age" we find ourselves searching for the best price we can find. All the while not thinking about the "value" of customer service. Is an extra dollar or two in your pocket worth bad service? The answer is no!

Good service DOES have "value" and it's worth paying for! So my advice is, before you waste time trying to find a better price elsewhere think about what it might cost you in the long run should you encounter a problem.