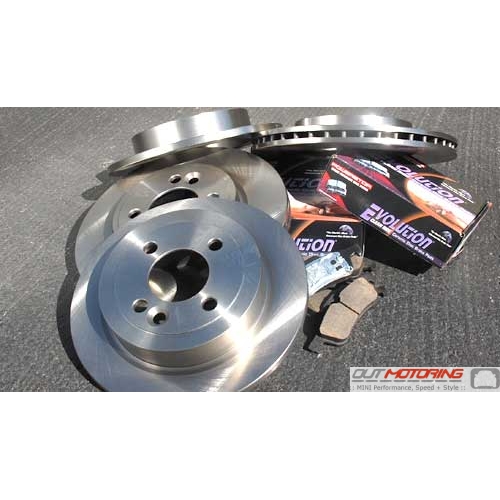 If you have purchased this item and would like to leave a product review please sign in to add your review.
1 Most useful customer reviews (see all reviews):
Guest
I installed the "Budget Master" disks and rotors for a friend before she turned in her R50 lease. The parts looked well made and went together quite easily, fitting her 2006 Cooper well. She reported that the car stopped better than ever for the 1 month she drove the car before returning it at the end of lease.

The pads included a slot for the wear sensor, which I was not expecting at this price.

Thanks for a great, low cost option!

Was the above review useful to you? Yes (2) / No (0)
If you have purchased this item and would like to leave a product review please sign in to add your review.

Received my headlight rings and start button covers in record time. Which was awesome. A suggestion would be to send instructions with the products. Otherwise experience was awesome. Justin Montoya
I went to the outmotoring store on Monday and the lady who helped me was just really nice and easy to work with. Josh Bertram
I bought a Convertible Rear Beltline Trim Kit for my R52 . I was really concerned if it was going to fit like the original. This part is very expensive, so I was quite concerned. I finally bought it and it was the best thing I bought for my Mini. It fit perfect. Outmotoring customer service was amazing. These guys are a class act. Thank you. Michelle M
Read MORE COMMENTS »      Write Your Own Testimonial »