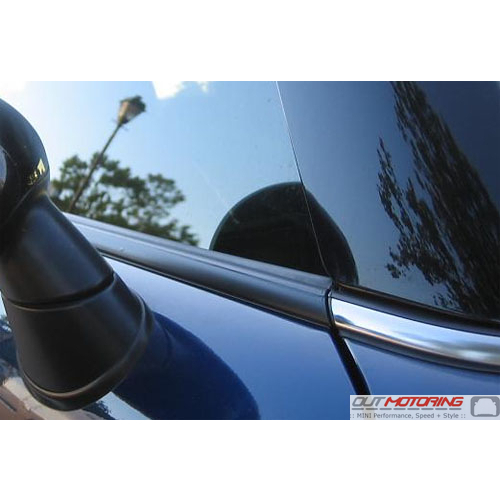 If you have purchased this item and would like to leave a product review please sign in to add your review.
2 Most useful customer reviews (see all reviews):
Kim S
This customer purchased the item at our site.
Ordered the Glossy, and it is super glossy. Installation was relatively straight forward. Take your time, align the top or bottom for the full length, then slowly smooth down the line. The bend of the corners was the most difficulty to apply. I used a hair dryer to smooth some of the wrinkles and it looks great at a distance, decent close up. My husband didn't notice the imperfections, but I received several feet extra in my roll, so I may redo two pieces of the beltline.

Was the above review useful to you? Yes (32) / No (7)
Steven Banks
Recently bought the Glossy finish for my F55 S. If you're the type of person that can lay down a phone screen protector straight, you can do this. I prepped the beltline with isopropyl alcohol, wiped it down, and applied the vinyl. A little heat gun action and it looks GREAT!

Was the above review useful to you? Yes (3) / No (0)
If you have purchased this item and would like to leave a product review please sign in to add your review.

Thank you very much for your generosity shown to our Club with the presentation of the MC2 magazines, Outmotoring shirts, plate frames, etc. Our members will be truly overjoyed when they receive them at our meeting. As I tell everyone, Outmotoring is a first class operation.
Thank you very much.
Gary Ellers
President
Mid-Columbia Mini Club
Washington State GARY ELLERS
The best company to get your Mini parts from! They have a great selection of products for all your Mini needs which comes with the best customer service you can receive. They are quick to respond and make your shopping experience the best it can be. Yes, you may find what you are looking for at a lower cost but no other company will beat their level of customer service. Thank you Outmotoring for everything! Nathan Saurer
this site is awesome it has everything mini
the customer service is good looking forward to make my mini better with Out Motoring i only wish there were exhaust options
my products arrived within one week everything was nicely packaged!
a good place to get your mini needs from
Thank you Out Motoring!! abdullah miralim
Read MORE COMMENTS »      Write Your Own Testimonial »