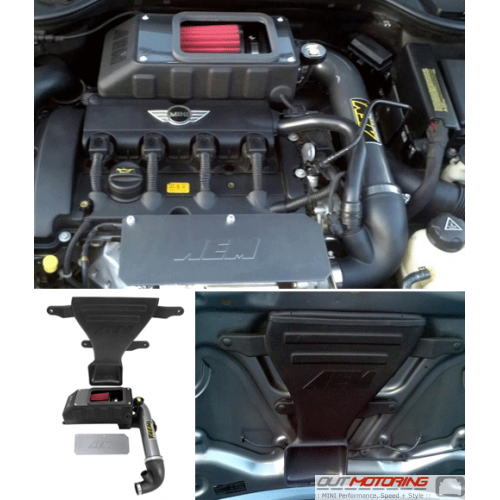 If you have purchased this item and would like to leave a product review please sign in to add your review.
2 Most useful customer reviews (see all reviews):
Guest
Installed on a 2011 MCS. Very easy to install, except on 2011+. You must use your stock tube from the tubro due to two sensors being mounted in the tube. I trimmed down the AEM pipe to fit from the air box to the stock tube. AEM heat shield must also be trimmed on the N18 engine. The oil cap filler is closer to the front of the vehicle and will not allow proper bolt alignment without a trim. Overall outstanding.

Was the above review useful to you? Yes (4) / No (0)
Eric MacKay
Picked up the AEM cold air intake and just installed this past weekend on my 2012 R58 JCW. Th install was easy and went in quickly with a minor mod needed to the mounting hole which was drilled out a bit.But unless I missed something, the next morning I went to work with way less power now in the car. and I'm a bit perplexed by the issue.And the check engine light was on. disconnected the battery to try and reset the system with no luck. Car is now at the shop getting looked over. For something that in reading needed zero ECU or tuning needed, has me frustrated. Any reading have any insight would be greatly appreciated.

Was the above review useful to you? Yes (2) / No (0)
If you have purchased this item and would like to leave a product review please sign in to add your review.

I just received my (latest) order from you guys, Blackline taillights for my R56. As always, the quality of the product was equal to OEM and the fitment was perfect. The DIY installation was quick and painless.
I just wanted to thank you for consistently offering high quality aftermarket parts and goodies for our cars.
I appreciate the repeat customer discount, and since mods never really end, you'll be hearing from me again, I'm sure. John Alfenito
Ever since I have stumbled onto this site I have not been able to leave it. The prices are good and the customer service is top notch. I will be a customer for life due to all the above and great products. Thank You.. Brett Anders
Great first mod knocks out two birds with one stone (great power gains, amazing sound enhancement) for a great and really low price! 10/10 would recommend